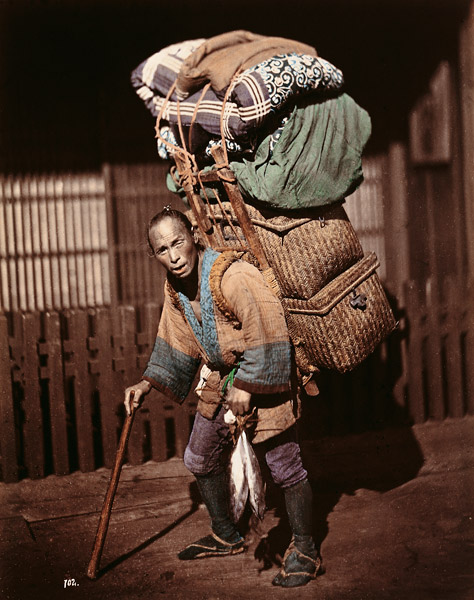 
All mundane portable storage containers that are strapped to, looped around or otherwise attached to a PC are either small containers or large containers.

Small Containers are things like scroll cases, belt loops, bandoliers, braces, ammo pouches and quivers. PCs can have any number of these containers on them.

Items stored in Small Containers are regularly vulnerable to wear and ruin from exposure to the elements but are easier to get at while the PC is under duress.

New Rule: Other than PCs of exotic origins (PC's body is especially suited to hauling large loads), a given PC cannot carry more than two large containers that are currently in use (ie, have stuff in them).

Obviously, GM's call as to what constitutes what size and all that.

Any one thing that takes up a slot or more on its own (generally, armor, or other large, bulkier things) can be stored only in Large Containers or has to be managed some other way (like wearing several swords on your body).

If you're carrying two full Large Containers, you're encumbered. No precisely negative mechanical repercussion, but it will affect your character's performance in a number of obvious, ought-to-be-expected ways.

I like that encumbrance forces decisions about what to take into and out of a hazardous area, but I generally dislike employing weight as the metric driving those decisions (weight seems opaque to me: I'm not sure how much a given thing weighs and I'm not sure my players know either or that our guesstimates would even be in the same ballpark whereas I think we all can easily describe and guess approximate size). Putting readied items in jeopardy is a fun way of getting the same kind of thing happening at the table.

More to the point, I think it's something that GMs do on a fairly regular basis: "oh, you're fording the stream? How do you get your pack across?"

I've puttered around with how to resolve the backend of this mechanic, off and on, for a period of years. Having only stuff in the large containers encumber. Having a number of slots for Large and Small Containers.

The slots I've suggested above are meant to be mathematically approximate to the excellent/elegant encumbrance system +James Raggi uses in Lamentations, but are inspired by +Jack Mcnamee and +Matt Rundle's system (and, of course, was first inspired by the first two games in the Diablo franchise). Frankly, I prefer Jack and Matt's system to mine, but I can't really get the group on board (too harsh, too tricky to manage going in and of dungeons with loot, which is our primary mode of play).

I tried a more traditional approach where large containers encumber, but that felt like I was cluttering the thing up.

Jeopardizing stuff is interesting in and of itself, but as a GM I've frequently felt as if I was being a dick when I ruined someones rations because they'd taken a trip through a lake, a room full of fire, a giant's stomach, etc. I mean, it makes sens that that happens, but it still feels harsh to me. By handing to choice to the players I've noticed that
(a) they are now hyper-aware of their PC's surroundings and the game has emphasized exploration a great deal more than it used to. This makes establishing atmosphere way easier;
(b) players get way more freaked out by atmospheric cues than they used to (they treat the entire environment as a monster, basically, which is cool and, as someone who has done some  solo hiking and some spelunking, resonates)

ALSO: shoutout to +Brock Cusick  who came up with "Packs and Pouches" as a better name for "Large and Small Containers."