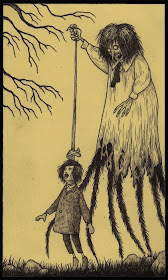 You are all children. No younger than 7, no older than 14. You live on the same block or nearby and you probably attend the same school. Something is wrong and only children and animals can see it.

The night is longer than it ought to be, the temperature drops and there are wolves bigger than cars in the streets. At night, the shutters clap against the house, brushed aside by the enormous grey-black, craggy knuckles of a vast and careless hand, the sidewalk is wet with ropey drool. "Always so rainy," the adults say, as the step over the puddles.

Something goes from house to house, tapping at the windows. It has large reflective eyes, like an owl. The adults do not see and they do not understand why they must not open the windows. Next door, they are all different. They are cold and you saw one killing a squirrel while its parents watched. Next door, all the windows are always open.

Childhood rhymes hold new secrets, open doors. Crouch down in hiding places and the branches grow wide and long, the bush becomes a knot of trunks, the trunks roads and everywhere they go strange and terrible, full of knights dead in their armour and beautiful women in beautiful dresses covering spider legs and they will try to drown you in a vat full of other small, floating bodies or wear you like earings or walk you like a dog.

There are signs and symbols. A threadbare shirt worn by your grandfather, a riddle in Latin, a saying in Greek. The broach in your mother's sock drawer. You present them against the dark and the worst things to turn them aside for a time.

And still things change. The world grows dark and shadows lengthen, take on new forms. From the trunks of passing cars, voices call your name. Under the floorboards, scratches. Things want to be let out, they want to be let in and they are always hungry, curious, violent, terrible.

Characters
Roll d8+6. This is your age.

Choose a character class/type: there are Tough, Studious and Truant.

Truant characters have 5(4) Endurance Points. 2 Secrets. Damage die: d6. Starting stuff: clothes, cigarettes and/or a key to a safe place or one other thing. 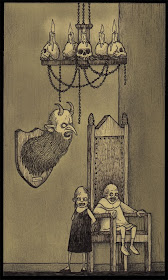 Secrets/Rewards
Secrets are rumours you hear whispered during recess or things you see out your window at night, clutching bedsheets. They are strange facts you overhear recounted on the news or They are the things in your weird Aunt's basement and they are the reason it's spring and none of the trees have grown any leaves. None of the adults will believe you. You can only know one Secret before they start weighing on you. Every Secret known past the first does Endurance Points damage (ie, if you learn a second secret, subtract 1 from your EP). For each of these additional Secrets resolved, restore one to your EP. Truants start with 1 point of EP damage.

Every week in the game or so, you learn of a new secret.

Resolve Secrets
Resolving secrets is also something only you can do, so things will just get worse, more families going missing or strange, until you do something about them. If you don't do something about what's happening, you'll slowly fall into darkness, despair, anxiety.

Urn of Great Aunt Edna. Held aloft, produces light as bright as the sun. All bad things are held in place for a turn.

Old Flute. When played, will open a door or lock one against any force.

Cape from the School Play. When worn, may hide you in shadows as if invisible.

Anything that is really good will keep you safe against something bad, but only that one time. Afterwards, it's just normal, whatever was special or awesome about it has been ruined or effaced by the bad things and dark places.

Safe Places
Your fort, your bed, your friend's house.

If you're here, you can't be got at by the bad things.

Endurance Points
Tick down 1/round while in bad places, being pursued by bad thing or in combat. At 0, you can no longer forestall any attacks and start taking wounds, are exhausted. You can take a single wound. A second and you're dead.

A Warm, Square Meal
Restores all EP to current max. You can choose to forget extra secrets and restore all EP lost that way too. 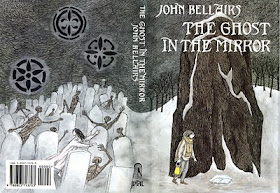 Some Secrets
1. The neighbours were meant to come back a week from now, but they showed up in the middle of the night. But where's their car? They also don't go to work or school, they just stand around, looking out the windows as their house gets dirtier and their clothes more filthy.

2. Mr. Jensen's been staring into space ever since that trip to the museum and they've taken his wife away. They say his house smells terrible, like rotten fish.

3. All the cats are missing and all the single women in town are carrying fashionable, fur-lined gloves. Do they all know?

4. All the dogs won't go near the principal's house. He's friendly enough but they say there isn't any furniture inside.

5. Paul's parents go every night to that old factory but we've not seen Paul in weeks. One of your parents were just invited to some club that meets at the factory...

6. Put your ear against a pipe to hear the next person to go missing. You can't quite make it out, but it sounds like the name of your little brother.

7. Mirrors are doors and they break the doors when they climb through them. There are broken mirrors everywhere...

8. There are two of Judy. The one the adults see and the one we see. Both are pale and so cold and falling apart. The one we see is begging for help but she can't do much because the other Judy has her all tied up.

9. So many people have a little worm sticking out of the back of their neck. Pull on it and the person dies. Everyone with the worm spends the night in graveyards or old cellars, stuffing dirt into their mouths.

10.  The giant animals that stalk the night are all going to one specific place in the woods that only exists at night. The floor rattles with human bones and a talking big with a crown of fire sits on a throne of thorns and bones.

11. There are weird lights out on the mountain. The dead are dancing and holding an enormous celebration. Terrible things happen when the party ends.

12. Every night, a horn sounds right outside your window. It used to be so loud that it shook the panes, but it's getting quieter and quieter. You can hear things outside, climbing the walls now too, they get closer and closer.